Since I have a new, better Stargate model, I decided to do a new, better version of the only real picture I made with my first Stargate model, namely the ‘gate in my backyard. I also added a little something to allow the inner ring to spin freely. I’m not 100% happy with where the rendered concrete meets the real concrete, and something seems off about the scale and/or perspective of it, but I don’t know how to deal with that. 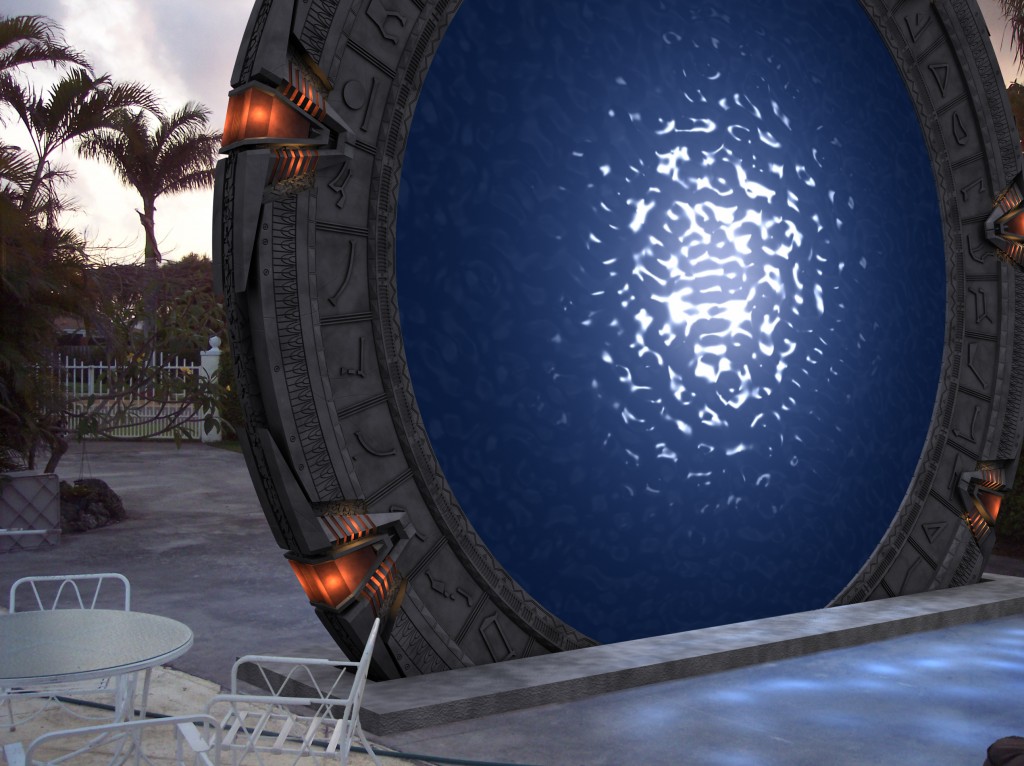 …and it’s about danged time, too!

Well, I’ve been lazy about putting everything together, and I didn’t want to advertise the model until it was ready to go out, but now it is. Anyway, I’ve remodeled my Stargate from scratch, and I do believe it is far superior now in accuracy, detail, and general prettiness.

First, to refresh your memory check out the old version.

Now, get a load of the new version, in all its glory.

This uses the lighting setup and cove object from the LWG, by Jason T and Lightwave7871. And, after using it, it’s the only way to show off your models. Well, if you’re me, at least. Gad, it just brings everything right out on the modeled details and textures.

There are three versions of the main model, a low, medium, and high-detail version.

Now, some of these next images were made while the model was still being fined tuned, so there may be minor details that are different.

And, don’t forget it’s animatable. You’ll need an up-to-date version of Quicktime to view these.

The second version of my model of the Stargate features both the SG-1 and Atlantis versions of the ‘gate, the Tollan Stargate seen in the episode “Pretense,” a base for the Stargate, numerous pre-set dialing sequences, and an in-camera animated “Event Horizon” effect.

An assortment of renders of my second Stargate model.

– An offworld activation on an Atlantis-style gate

– The beginning of the dialing sequence on an Atlantis-style gate

– Chevron One locks into place on an SG-1 gate

– An example of the dynamic lighting included with the puddle effect

While I have done a few experiments with compositing, this is probably my most ambitious effor. In case you’re wondering, that is my back yard (currently, and delightfully, hurricane free), with my new Stargate model placed in it. Perhaps SG-1 could come through that ‘gate some time. A nice, (if slightly overdeveloped) piece of the subtropics would certainly relieve the monotony of all those pine-tree planets.

Now all I need is a real one to put back there, to see how close I was to reality.

I did the compositing in Lightwave. I set it up to do that thing where it makes an alpha map for the ground stand-in based on the amount of shadows, just in case. I only have Photoshop Elements (which happens to be missing the Element of alpha channels), but I was able to use a copy on one of the computers at school to make a transparent image of the ring and its shadow, so all that remains is to reintegrate it into my original background and tweak it up a bit.

Another thing I noticed was that on the school PC’s monitor, the blue cast (caused by the light I used to simulate the glow of the sky) on the ground object (and the devision between it and the real background) was a lot more noticeable, and the shadow of the ring was a lot lighter. So while I’m most concerned with getting it to look right on my Mac, I may have to see if I can steal some more time at school to find a happy medium.

I rerendered the scene with a slightly modified ‘gate model (fixing a spot of missing detail on the back and adding a more accurate bit of detail to the inside surface, where the event horizon sits), and a slightly modified lighting scheme (I tried throwing a little more specular on it from the sun, but found the only way to get even a little to show was to have the light point straight down, which wouldn’t have fit in with the shadows all that well). I then recomposited the ‘gate in Photoshop, getting rid of the blue cast on my front-projection polygon. Only problem that remains is that the bump mapping in the chevron wells is having some kind of difficulty, causing the background to shine through as if it were partially transparent there. I’ve no idea how or why, and it doesn’t show up on the alpha map of the image.

In summery, I think it would’ve been far easier to go to Canada, steal the prop, and instal it in my driveway, then say it was a comp-job when I posted the pictures of it. It would also be endless fun at parties.

Well, after getting royally hooked on Stargate SG-1 (and now Stargate Atlantis) over the summer, I remembered an old tutorial on how to model a Stargate. After tracking it down, I began the process of building my own as part of my initiation into Lightwave modeler. While it’s not quite finished as yet, I think I’ve gotten as far as I can by my wits alone, so this post is part “Hey, look at this cool thing I just did,” and part, “Can anyone help me? Please?”

The ‘gate is fully animatable (and, after testing this baby out and finding how tedious animating the dialing sequence is, I’m going to be pulling out my trusty copy of Inside Lightwave [6] to see about some way to automate the process), and I’m inordinately proud of how the texturing turned out. Also, though none of the pictures here show it, I made three alternate spinning rings with different point-of-origin symbols. For the nit-pickers, I even accidentally added no less than three minor errors to find and bug me with. And I have no intention of fixing them, unless and until I make a version 2.0. And since I’m not even finished with this one yet, that’s a ways away.

And, now for the part that everyone’s been waiting for, the obligatory “Begging for help from the learned elders” portion of the post.

One: There’s a pattern of groves in the texturing of the original Stargate. I’m kind of at a loss as to how to paint proper-looking bump maps with good-looking semi-circles and randomly-connecting lines.

Two: I’m not entirely happy with the chevron glows, especially on the big light that isn’t actually a chevron but is part of the whole chevron-unit. It looks less like a clear thing with a light inside (which it should), and more like an opaque thing with a quickly-painted glow map on it (which it is). I’d really appreciate any ideas on how to reverse that little equation.

Three: The event-horizon. That damnable puddle. I can’t even get the pattern of ripples on the surface to look right, much less the blinding while patterns in the center. Everything I find on the internet says “Make a ripple procedural in the bump channel and point a spotlight at it.” Well, apparently, either I’m stupid or it isn’t that simple. This is the part I’m really interested in help on.

And, that’s it. Well, not quite. I took advantage of quite a few places on-line to get as far as I did, and I’d like to provide a little acknowledgment so I can sleep soundly tonight.

First off, to Ed Giddings, for his years-old tutorial that got me started, and the extremely high-quality renders of his own (far more up-to-date) Stargate clone. Honestly, it was some of the best reference material I could find.

Secondly, to the maker of the Stargate Glyph Font. In-freaking-valuable to my making the glyphs on the inner ring, and a pretty neat font in its own right.

Also, to the dedicated minds behind the Richard Dean Anderson Website, specifically the section dedicated to Stargate glyphs. In addition to providing reference for two other point-of-origin symbols, the bank of Stargate addresses allowed me to successfully attempt my dialing-sequence test (which, in retrospect, might not be such a good thing, given how tedious it was to animate. ).

And, finally, to the kind souls who put up the opening sequences for SG-1 and Atlantis on-line. Like I said, reference was sparse, especially moving reference.

Oh, and the cast and crew behind the movies and TV shows. Because, without them making such cool stuff, I wouldn’t have anything to try to recreate in my effort to eventually make my own cool stuff. You guys rule.

Well, I’ve been doing a little more work on the model, and have made (though not yet textured) the iris. Only trouble is, the jagging-out star bit in the middle doesn’t fit together quite right (I tried to get it so it would, but it would make the slats (which are like this: ////) fit together differently (like this: \\\\), and I had to decide which I wanted to be accurate more, the slats or the star. I went with the slats.)

Also, if anyone ever wondered how the Iris could fit inside the Stargate while it wasn’t deployed, rest assured, it can’t. That’s another little problem I’ll have to work around.

Now, for these animations, I didn’t have any movies of the iris opening and closing available, so I had to guesstimate the keyframes based on the sound files I had, so it doesn’t move exactly right.

Well, I got the iris textured. It doesn’t look quite like the real thing, with a noticeable seam where the blades meet up, and a slightly fuzzier pattern of blotches. I also had to make a judgment call, in that the iris appears by turns blue or tan, for reasons I am unsure of. I picked blue, on the grounds that I can’t think of any tan metals. Can’t think of any that are quite that shade of blue, either, but that doesn’t matter much. Anyway, see it for yourself, inside the high-poly Stargate.