After a year and a half, I’m running out of steam on the Stargate project for now, so I pushed myself to finish up the part I was currently working on, the version of the “kawoosh,” “strudel,” and “puddle” effects as seen in the movie.

END_OF_DOCUMENT_TOKEN_TO_BE_REPLACED

As a quick little side-project, the other night I built the SGC Plaque. Joseph Mallozzi, who was a writer and producer on the TV shows, has been posting high-res behind-the-scenes photos, concept art, and documents since the shows were still on the air, and recently posted a construction diagram of the plaque, which made it pretty easy to model in only an hour or two, most of which was spent squinting at the measurements and comparing with some photos of the finished plaque to see how things changed between the drawing and the actual piece.

There was also a 3D rendered version used on the show as a screensaver and decorative element on computer displays which was colored differently, so I made both versions. I didn’t sweat getting the textures exactly right (and there were some shape differences with the digital version I didn’t bother changing), just going for the spirt instead of a perfect duplicate. The gaudy ’90s texturing is pretty rough, and now we’ve entered a glorious era where flat color in CGI actually look okay.

March 14, 2021: This information is drastically out of date. I’m leaving the page up for historical reasons, but if you want far more accurate information about the design of the stargate setpiece, I recommend looking at the blog and Facebook page of The Children of Mac Gyver, or EMG, a fan-group which has used pieces of the original set-pieces and exhaustive research to construct their own stargate. You may also examine the model and renders of my newer model of the film, SG-1, and Atlantis versions of the Stargate

If you’re making you’re own Stargate and are using mine as reference, here are some larger, detailed renders, as well as information on certain details of note that aren’t entirely visible in the showcase renders.

The cross-section of the Stargate model. It’s difficult to determine how thick the cross-section is with any sort of confidence, and as I said above, the shape is slightly off, but it lets you see how the shape breaks down.

Along the inner edge of the Stargate is this series of raised details.

There’s a pattern of raised blocks at the inside of each chevron slot, as well as along the outer edge of the gate. This is mostly conjectural on my model, since all of the pictures of that area are blocked by the chevrons themselves. However this does look right, so it’s a good reference in that respect. 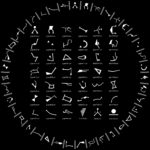 Most Stargate models, from what I’ve seen, are based on an inaccurate listing of the glyphs. I went back to the Gate used on the show, and created my glyphs from that primary reference, making this list more accurate in both shape and orientation of each Glyph. I’ve also included the three canonical Point of Origin symbols that were seen on the show, other than the typical pyramid-under-a-sun. 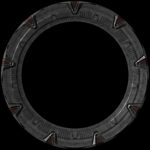 A high-res rear view of my Stargate. 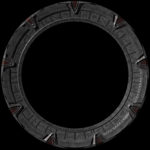 A high-res front view of the Stargate. The series of recessed details (three tracks, one of ovals and circles, one of repeating rectangles, and one of a pair of parallel lines traveling straight or in a triangle) on the innermost portion of the ring repeats, but I don’t precisely recall at what intervals, and I believe I fudged it slightly on the model. 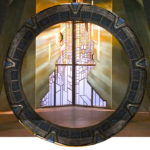 The original photo of the Atlantis Gate, retouched for 360º coverage. I recommend using this as a template, instead of my model, to get the most accurate overall shape possible. 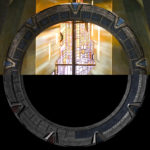 First, and most importantly, my Stargate is slightly thicker than it should be. I only noticed this by comparing it to a reference picture after I had done too much work to be able to go back and fix it. This is a comparison of the Atlantis Stargate prop with my model.