END_OF_DOCUMENT_TOKEN_TO_BE_REPLACED

So, I’ve still been fiddling with this in the background, conducting some research and prep-stuff. Just to make myself happy, I found an on-line calculator for centrifugal artificial gravity and got a spin-rate for B5 that I could use with authority (once every 90 seconds). I added more of a self-lighting rig on Rhys Salcombe’s Minbari Warcruiser based on Sheridan’s ship in “The Lost Tales,” with lights in the recesses between the ribs, and one of B5 Scrolls’ interviews mentioned how the high deffy Epsilon 3 map was made for TLT (a recolored Mars with a bunch of gouges added from topographical surveys of the Grand Canyon so there’s somewhere for the Great Machine to go) so I shamelessly ripped off that tactic because I don’t trust my own painting ability and it looked fine in the movie.

I noticed something while splitting out the rest of the shots for this episode which amused me. The last establishing shot before the rogue Minbari ship arrives is the sun going down behind B5 and the station lights coming on. The first one after the Minbari are taken care of is the sun coming up. So, I have three choices, near as I can tell.

1- I can ignore it, like they did in the episode. 2- I can keep the establishing shots and redo all the scenes with the Minbari ships to be in local night, which will look cool and/or be an enormous pain in the butt, or 3- I can flip the establishing shots so it’s morning when Lennier explains Season One to Sheridan and Ivanova and evening when everyone meets up at the officer’s club and Sheridan gives his speech to an empty C’n’C. I’m leaning towards the last one as making the most logical sense.

Yesterday I cranked out the next shot in the episode, an establisher of Babylon 5. When I was looking at it, I realized that, as nice and proportional as Ed Giddings’ B5 is (the benefit of being the first one released after plan drawings of the original were released, IIRC), it’s really ’90s in terms of detailing. Since I’d want to replace it as soon as I could with a HD-level version anyway, I decided to phone it in a little and not do a proper shot breakout for this one yet, and just use it as a placeholder for now. Since I didn’t go through all that work, it meant I wasn’t really that upset when I looked at the finished product and found that I’d forgotten to reset my fake nebula radiosity from 30 fps to 24 fps, so the fill light is flickering, and that the red light in the center docking bay has shadow casting on, so the bay flickers off then back on when the little shuttle flies through it. 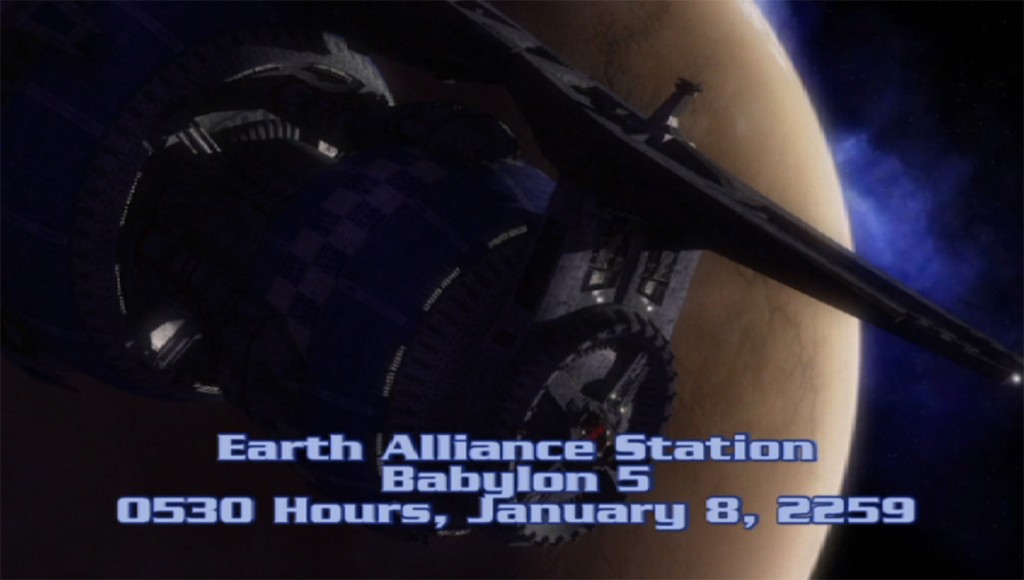 So, something I’ve talked about more than once is the pie-in-the-sky idea of an HD transfer of Babylon 5 which, by necessity, would require all-new visual effects, not unlike what was recently done with the original Star Trek series. A couple weeks ago, after school died down, I decided to relax with some nice, simple spaceship layouts, and begin attacking an episode of B5, possibly eventually doing the entire thing. For the moment, though, I’ve just done two visual effects shots in the teaser.

The episode I picked was the season two premiere, and the sequence is the very beginning, the introduction of Captain Sheridan aboard his soon-to-be-former command, the Agamemnon. I never seriously considered trying to be exceedingly faithful to the original shots, mostly because that’d be no fun. I mocked up a couple of images to show what such a recreation might look like, and, who knows, if someone was paying me I’d certainly be open to trying to match the originals as close as possible. But since it’s just me, I figure, why not indulge myself?

I’m not sure if I’m going to move forward on this anytime soon (I certainly haven’t ever completed a long-term solo production yet), but I prefer to live in hope. If I do, I’ll likely revisit earlier shots as I go along to adjust them.

Without further adieu, here’s the shot. 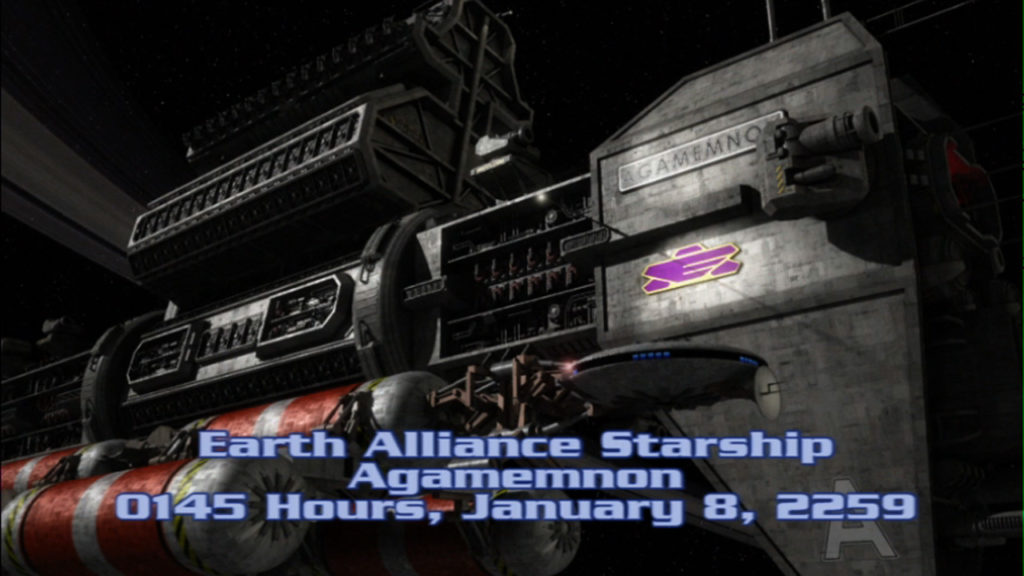 Omega Destroyer by Rhys Salcombe
Freighter by Dave Hribarm
Jumppoint by Yuri A. Parovin
Planet and Rings by Björn Jónsson

This is going to be a short animation, a sort of spiritual successor to my old BSG picture “Bombardment,” and also an actual successor, in that I’m using the same shells and smoke trails. Actually, I ganked the key and fill lights from that scene, too.

Battlestars by tan.j
Rendered in Lightwave 9
Composited in After Effects

The first shot is pretty much done as far as it goes. I’m planning on doing another two to four shots in this sequence involving an original series Cylon Basestar being blasted in two by this salvo.

I’m going a bit breakout-happy (it already saved my bacon since my first version of the interactive lighting from the shells had an excessively short fall-off distance and I didn’t realize it until I saw everything put together in real-time. It was nice that I could fix that with minutes instead of hours of re-rendering), so I’m thinking about slipping some more stuff into this shot, as well. I found a tutorial on AAA traces that I’m going to try out to see if I can get the wee little guns along the corners of the battlestars to do their thing. I’m also thinking about modeling some extremely low-detail cylon raiders and vipers to buzz around. A flak cloud would be nice, too.

I’m also going to be doing my first real attempt at modeled damage on the basestar, and animating stuff being blasted apart. If anyone knows any good tutorials for flak clouds, modeled damage, or blasting stuff apart in Lightwave, that’d be awesome.

I got another bite of the render bug the other day. I’m going to need that to start coming a bit more consistently again.

I originally visualized this angle with a Miranda-class ship, but I don’t have a modern Miranda that’ll hold up to this kind of proximity and detail. While I was assembling the scene, I found I’d already had one from an earlier attempt to make a nighttime drydock render, but I hadn’t been able to settle on a good angle. So I loaded in the old scene, aligned it to fit the picture in my head, added a bunch more spotlights, and rendered it.

I think this works much better as a night shot than my prior attempts have. My initial inspiration for the shot, lighting and mood-wise, was this photo of a cruise ship docked at night:

The background is from NASA’s library of astronaut photos of Earth. It’s actually a shot of the terminator. I desaturated it and then recolored it dark blue to represent a barely-visible nightside. Also, since I figured a night shot would require a longer exposure, I cranked up the motion blur well past 100%, so the various shuttlecraft that are buzzing around are barely-defined blurs.

I’ve re-rendered “Quiet Night” in 5K. There are a couple of deliberate changes in this one compared to the original version of “Quiet Night at the Office.” The most obvious is probably that I repositioned all the travel pods and work bees because I set up the scene to animate and wanted more visually interesting flight-paths. I dialed back the motion blur a bit, as well.

A little more subtle touch is that I changed the ship from the Enterprise to the Endeavour, after a tedious evening of aligning and stenciling text. I wonder if there’s a script or something that you could write to do that.

I brightened up the windows considerably on this image, possibly too much. It’s more like my original aim for them, where they still look a lot like the featureless white of the studio model, but have just the subtlest suggestion of depth. You can just barely see a person in the first long window to the left of the gangway. I also think I might’ve been a bit too heavy on the grain, but I’d like to see it on a retina/hiDPI/5K screen before I make a final judgement.

And here’s an animated version.

Since I hadn’t done much in Lightwave for the past few months and have the chance again with the successful end of my creativity-sapping traditional drawing course, I decided to try out an animation. I wanted something reasonably simple to warm up, so I did a series of four drifty shots of Raffs’ Basestar, assembling them into a montage like the ones used for establishing shots of Basestars in season 3 and 4 of the new Galactica.

It also gave me the chance to try out Premiere and After Effects, as well as being my first try at faking radiosity with a spinning light globe and rendering to OpenEXR. I was going to try using Screamernet to set up a little render farm since I have access to more than one computer for the time being, but since it was apparently designed by sadists for sadists, I found it was easier just to grab my dongle, start up Layout on each computer, and set each machine to render a different range of frames.

I’m pretty happy with how it turned out. 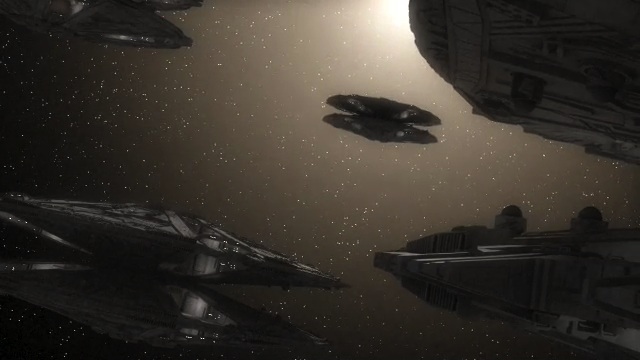 These five brief Babylon 5 animations are from my first year or two using Lightwave 3D, somewhere around 2002/2003.

Based on a shot from the Babylon 5 episode “GROPOS” with a Nova Dreadnought alongside the station.

Music: “Without Help” by Jerry Goldsmith

Once upon a time, I decided to redo, shot for shot, the “Shadow Threat” teaser released for the now-long-canceled Babylon 5 computer game. I used these two shots to make sure my timing was right so far and that it meshed with the trailer’s soundtrack.

This one actually started life as a still, which I decided to render as an animation on a lark.

Another shot-for-shot, this time of the Hyperion’s entrance in “A Voice In The Wilderness Pt. II.”

A render based on a shot from the episode “Matters of Honor” with the White Star exiting a Jumppoint.