I had a feeling that this Star Destroyer might be happier in linear color system. It looks like I was right. Unfortunately, it wasn’t particularly happy with rendering at a higher resolution, though.

I revisited one of the passes I did for my 50th Anniversary picture to better get to know linear lighting. It mixes and builds differently, so I readjusted all of the intensities of the scene lights (and then further played with the contrast in Photoshop to get some of the drama back). I’m going to have to practice a lot more to get things down. Surface settings also react differently. That’s most apparent on the inboard grill of the warp engine, where you can see the blue glow reflecting from its twin on the other side of the ship.

END_OF_DOCUMENT_TOKEN_TO_BE_REPLACED 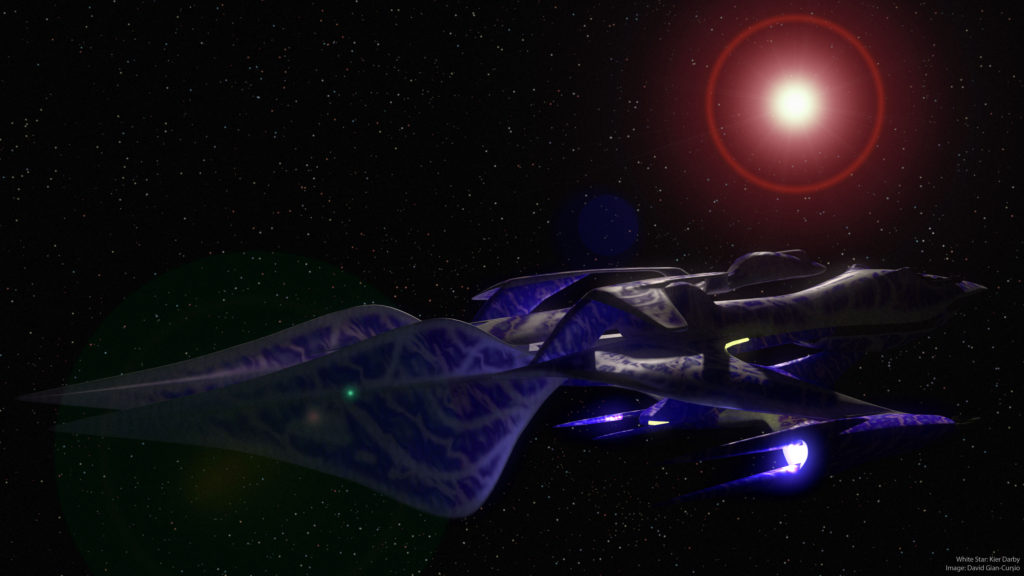 At the urging of Rhys over at Foundation3D, yesterday I finally figured out how to adapt my workflow to use linear color.

There are many explanations on-line for what a linear workflow entails. It’s fairly technical, but the upshot is that computers have to mess with images to get them to look right. That’s great, except when you process those images, say by using them as texture maps in a 3D rendering calculation. All of the renderer’s math is thrown off, because it’s using source data that was filtered for display, and things come out looking wrong. Everything is wrong!

END_OF_DOCUMENT_TOKEN_TO_BE_REPLACED

A panicky, last minute render. I ended up recalling a shot from the Star Trek: The Next Generation episode “The Best of Both Worlds.”

I intended to try doing my post work in After Effects rather than Photoshop, but that didn’t work out (apparently, After Effects, 5K frames, and eight-year-old laptops don’t mix). 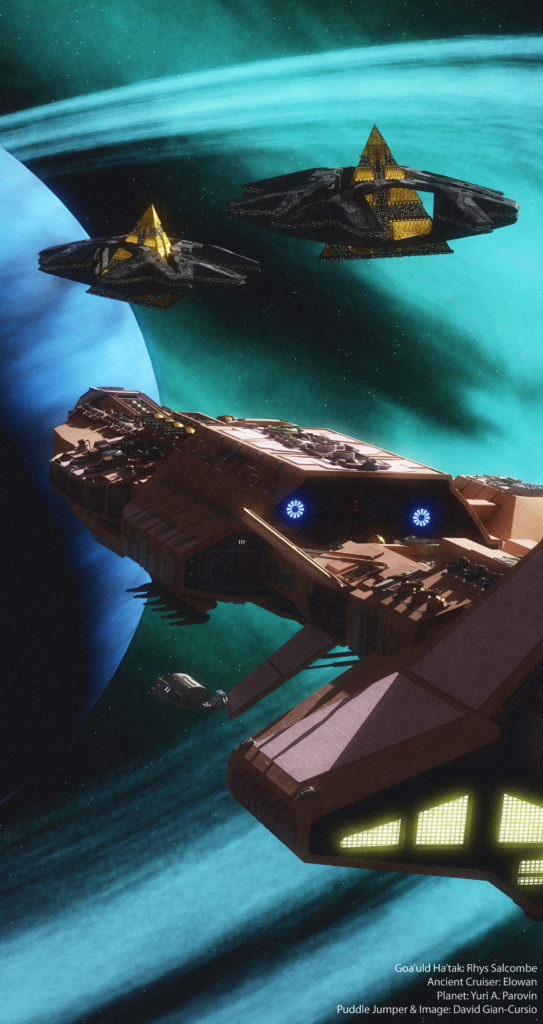 A Stargate-inspired picture, set thousands of years ago, imagines the last of the Ancients, crossing paths with the Goa’uld during the rise of their own empire.

I used the portrait orientation to mix things up a bit. Same with the choice of subject.

Here’s the image that was going to be yesterday’s render. I ended up having to re-render in the morning when it proved to be too expensive for my usual settings to finish overnight.

It depicts a moment from the “Destiny” novel trilogy, which include a massive Borg attack on the Federation. At this point, a fleet of Cubes has attacked Vulcan, but has briefly been disabled with the same “sleep” command that Picard once used against them. The surviving Starfleet ships quickly move to scuttle the Borg cubes before they wake back up.

One important thing I learned from this image is that Lightwave’s built-in lens flares don’t play nicely with the newer photoreal motion blur (not that surprising, considering how old LW’s flares are). I’d been thinking about making a geometry-based Star Trek torpedo effect anyway, but I’ll have to keep this in mind for shots where flares aren’t easily avoidable.

I realized partway through the main image I was working on yesterday that I probably wouldn’t be able to finish that night, so I switched gears. I had a few false stars before I ended up doing a Firefly beauty shot. One little touch was moving the starboard shuttle out to launch position, so it could pick up the glint of the sunlight. 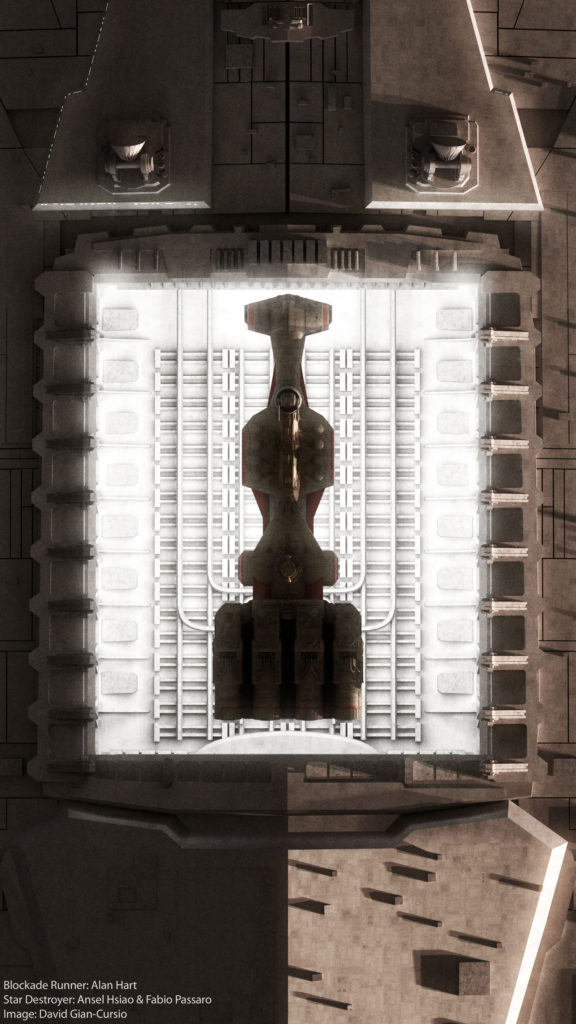 Having run the numbers earlier, I decided to go with a portrait-oriented Star Wars image to mix things up a bit. I also spent too much time screwing around with the Borg Cube model to do anything very elaborate.

Just before I ran the render, I remembered that this is a scene that takes place at Tatooine, so I added a second key light to represent the second sun, with a 60/40 split between them as far as lighting goes. They’re also different sizes, so one set of shadows is sharper than the other set.

Last minute picture. The Defiant’s shuttlecraft returns from a visit to an Intrepid-class ship.

There’s a certain ebb and flow to these pictures, I’ve noticed. This one was another “getting acquainted with the model” image. I’m hoping to do a couple pictures representing scenes from the Star Trek novel trilogy “Destiny,” which involves, in part, a massive Borg attack on the Federation. The nebula is a Hubble photo I considered as a possible background for yesterday’s picture.